(If photos below are not visible, click the x to view.)

Over the weekend of January 23rd and 24th in St. Petersburg, Florida, a new coalition of progressive Black organizations and activists convened for an agenda setting and organization structuring conference, the Black Is Back Coalition for Social Justice, Peace and Reparations National Conference.  The Black Is Back Coalition describes itself as an organization of organizations, “comprised of otherwise independent groups and institutions that fit within the generally anti-imperialist, self-determinist tendency of the African community.”[i] 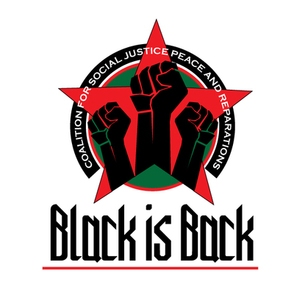 This is a welcome development in the political life of the African national community in the United States.  For thirty years now, U.S. Africans have been hamstrung by our overwhelming allegiance to the national Democratic Party and its state and local branches.  Yet too often, those bemoaning rock-solid Black support for Democratic candidates have offered either a turn to the Republican Party, a solution rightly resisted and ignored, or a support of alternate parties like the Green Party, that are still perceived as primarily white institutions, rightly or wrongly, despite the recent presidential ticket of Cynthia McKinney and Rosa Clemente, both African women and the latter also Latina.  An organized, leftist, nationalist, internationalist, grassroots political presence has been relegated to the hard and obscure struggle of genuine community organizing, often around local and very specific issues rather than some sort of national program of action.  The Black Is Back Coalition can fill the empty space in Black politics created by the cooptation of Civil Rights Movement politics into the Democratic Party and the military defeat of the revolutionary struggle of the late 60s and the 70s.

At what point does optimism become fatal?  Recent Pew poll[i] results report a significant increase in the percentage U.S. Africans who feel like they are better off now than they were 5 and 9 years ago despite the hard facts on the ground of higher unemployment and a wider wealth gap than in either 2004/2005 and 2000/2001.  Black folks in the U.S. remain over-represented in every negative indicator of living standards in the United States.  But still too many Black folks are living off the heady fumes of having voted for President Obama and feeling that they have representation at the pinnacle of power in the United States.  The actual exercise of power either ignores the Black condition or acts hostilely toward Black people, especially the majority Black working poor.  That includes the way President Obama has been wielding power, like a corporatist, a militarist, and an imperialist.  Black Democratic Party activists have been effectively silenced by the White House and the Democratic Congressional leadership.  The Black is Back Coalition provides a principled opposition to the anti-democratic, class-war-from-above politics practiced by the bipartisan elites in the United States without the restraints embedment in the Democratic Party requires.

One full year into President Obama’s administration, several liberal and left-progressive organizations and activists have harshly assessed the President’s performance. On progressive issues like health care and opposition to the war, the president and Democratic leadership performed woefully, exploiting none of the social energy created by the 2008 election, and thus ceding the ground to right wing forces that were able to construct the health care discourse around an intrusive, bullying government, casting health insurance reform as a mythical socialist takeover.  So I find it interesting that there has been a relative media silence around the Black Is Back Coalition, including and perhaps especially some of the left and alternative media.

The Black Is Back Coalition held an anti-war rally and a march in Washington, D.C., November 7, 2009.  I could find very little to no announcements about the event in local progressive media, including the local Pacifica network affiliate, KPFK.  C-Span didn’t cover the rally, or the march, its weekend being taken up with the Senate health insurance debate and vote.  The Coalition website posts reports from relatively few examples of the coverage, including two from a participant in the rally and coalition, Alex Morley from Blackfood.org out of the Bahamas.  Besides, Blackfood.org, Agence France-Presse, D.C. Indymedia, NY Indymedia, Free Speech Radio, One People Project, the Los Angeles Sentinel and the Afro American published or broadcast reports on the rally.  In the great mediascape of late modernity, that is precious little coverage.  There is certainly more, especially if one is familiar with African revolutionary cyberspace, but that is still not a thoroughly generalized audience.

The Los Angeles Sentinel’s coverage is at least somewhat reassuring.  Speakers at the rally roundly criticized Obama for his policies and their execution.  He was taken to task for expanding the war in Afghanistan, maintaining troops in Iraq while calling it a pull out, keeping the Guantanamo Bay prison open, continuing the extraordinary rendition and torture practices instituted by the Bush administration, and his complete snub of any specific African issues, both domestically and internationally.  The refusal alone to attend the World Anti-Racism Conference in Geneva, the follow up to the Durban Conference of 2001 snubbed by the Bush administration, merits deep reproach.  Nonetheless, Black press like the L.A. Sentinel have been nearly exclusively approving in its coverage of the president, going so far as to characterize the severely compromised, insurance industry friendly Senate health reform bill as a victory.  Uncritical reportage of the administration under serves the readership of these papers, and Africans cannot afford to be further underserved or mislead by anyone.

Since the November march and rally, the Black Is Back Coalition participated in a peace demonstration in Washington on December 18, again with little notice.  The silence around an independent, progressive Black coalition of organizations may arise from the discomfort many on the white left feel with Black Power movement politics, with a politics of Black independence that can accept solidarity but not “allies” who dictate terms.  The members of the Coalition come from the tradition of struggle represented by Malcolm X, the Black Panther Party, and Dr. King in the years after his Nobel Peace Prize.  These are Fannie Lou Hamer’s politics.  The member organizations come from a wide range of progressive Black politics including the African Socialist Internationalists of the Uhuru Movement, the Malcolm X Center for Self Determination, members of the Green Party, a North Carolina NAACP chapter president, Cynthia McKinney and Dignity, Glen Ford of blackagendareport.com, and at least one elected official, New York’s city councilman Charles Barron, among many other groups and individuals.  Such a self determined, anti-imperialist, grassroots U.S. African liberation movement should be supported by left forces in the United States rather than treated with suspicion or as irrelevant.

The conference held over the weekend of the 23rd and 24th began the process of constructing programmatic actions to create solutions to the modes of attack on the national and international African community, fundamental to creating justice and peace in the world.  The Coalition resolved to oppose U.S. imperialist actions abroad, challenging Obama to end the wars in Afghanistan, Pakistan and Iraq.  The Coalition opposes AfriCom, the U.S. military’s African Command, now headquartered in Germany but looking for a host in Africa, a prospect so unpopular in Africa that even those friendly governments like Liberia’s have not been able to reach an agreement without a political price to pay at home.  The Coalition has resolved to move on the issue of mass incarceration of U.S. Africans, a most stark contradiction of U.S. so-called democratic society.  The Black Is Back Coalition also recognizes the dynamic relationships of state power at work in the interplay of this mass incarceration, increasing at the fastest rate among U.S. African women, the death penalty, and the virtual disappearing of U.S. African political prisoners and prisoners of war.  The Coalition has further resolved to strengthen operational ties regionally with Western Hemisphere African communities outside of the Unites States, evidenced by participation from Canadian activists and Bahamian activists at the November march and rally, and the presence and participation of Alex Morley of the Bahamas also at the January 23rd and 24th conference.  The Coalition resolved to support the Global South in the fight for climate justice, and in its name, makes reparations a critical component of the struggle for justice and liberation.

In short, the Black Is Back Coalition is attempting to put the African condition back into the political consciousness of the African people, the nation and the world.  Barack Obama, Condoleeza Rice, and Colin Powell must not remain the faces of U.S. Africans in the world.  We have been associated with the struggle for justice in the world.  We cannot allow the U.S. African to become the pretty face of empire.  We must not allow the secret race war against U.S. Africans to go unnoted and unanswered.  When the first real Black U.S. president can’t or won’t mention the conditions of Black people in this country accept to chide us to get our behaviors together, then we must be in a much more vulnerable position than we have been since the end of Reconstruction.  Project Censored listed the shooting of Blacks by Whites in New Orleans in the wake of the levies breaking after Hurricane Katrina on its list of most censored, unreported or underreported stories of 2009.  Of course, the events they describe go back to 2005.  And they only list one story on the war.  We need an African social movement now in the United States. The Black Is Back Coalition is poised to jumpstart that movement.  We need to support them.  If you’re reading this, and who knows if anyone reads these posts, then check out the Black Is Back website, www.blackisbackcoalition.org. Check for yourself and see if you agree with the Coalition’s Principles of Unity.  Then maybe you can be a part of the people’s movement.  Peace and Uhuru (means Freedom).