These are scenes from the second day of protests from one pocket of protests in Los Angeles the day following the Zimmerman verdict.

What is left to say? Now a month since a jury of his peers acquitted George Zimmerman, what is there left to say?  Some of us have assailed the failure of the justice system, the lackluster performance of the prosecution, the cynicism of the defense, the complicity of the judge in her pre-trial and pre-deliberation instructions to disregard the issue of race and racial profiling, the apparent inability of the jury to empathize with Trayvon’s suffering and his parents’ pain rather than Zimmerman’s predicament and his family’s anxiety.  These targets deserve our missiles, but they were only doing what the system conditions them to do, protect white power and protect white property, including the property whiteness.  The mainstream responses to the verdict were predictable: calls for “peace,” calls to respect the verdict, appeals to the underlying fairness of the U.S. judicial system, rote denials of racism, praise for Trayvon’s parents for their “quiet dignity” and calls for prayer, the barely contained triumphalism of white folks, spewing forth on social media and cable news, and comments from the black POTUS and his operatives in civil society designed to de-mobilize the righteous anger of Black folks and their allies.  But we shouldn’t expect justice from a system wired to exploit and oppress.  We shouldn’t squander the moment by simply pursuing a federal and/or civil rights case.  What do we mean when we have been correctly in the streets demanding justice for Trayvon? What is Justice for Trayvon, for Aiyana Stanley Jones, and for the all the other Black folks killed extra-judicially, one every 28 hours? And how do we create that for ourselves so that we can stop hurting? 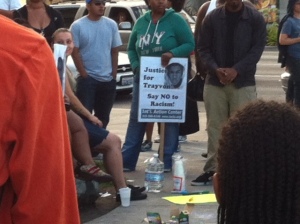 Even though the other jurors have challenged the characterizations of their deliberations as represented by Juror B37 to CNN’s Anderson Cooper, they nonetheless perpetuated the denial of the right of Black people to life.  That’s what that verdict and the stand-your-ground-law that was never directly introduced in the trial but haunted its every performance finally mean: Black people cannot expect their right to life to be recognized or respected.  It is a version of the Taney decision in the Dred Scott Case: Black people have no rights that any white persons need to respect, including the right to life or self-defense.  Trayvon could be pursued and confronted, and when he resorted to defend himself, unarmed, he can be shot and in effect found guilty of aggravated assault.  And we knew that we were all found guilty again, guilty of making white people anxious, agitated by our presence, a presence they both abhor and demand.  We remain stuck in someone else’s racialized psycho-drama, one that casts us as the stain that must always be removed but that must also always be present as the negation against which whiteness finds meaning.  We need to pull ourselves out of that phantasm.

As to the fairness of the trial, it was plenty fair, that is, plenty white.  Zimmerman was tried by a jury of his peers, his white peers, 5 to 1, and his class peers or peer-wannabes.  And the defense presented raised reasonable doubt in the jurors’ minds. But reasonable doubt means different things to different communities.  Reasonable doubt can’t be abstracted from direct experience or pre-existing attitudes and expectations.  It does not operate in a vacuum.

That’s why Zimmerman was armed.  That’s why thirty-three states have instituted stand-your-ground laws.  That’s why white people have been buying guns in record numbers since the election of Obama, a major feat considering how well-armed the white U.S has been since there has been a U.S.  Fear of black people is always reasonable to most white people, and others, in a system of white supremacy.  Fear animates U.S. politics and culture.  The jury arrived at the verdict demanded by precepts of racism white supremacy, the a priori guilt of Black people, and subsequent “necessary” behavior of white people to do what is fair for them if not justice for Black people, and others, the defense of whiteness. 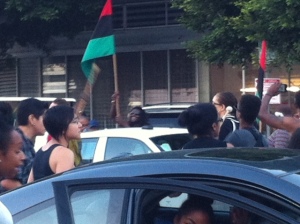 LAPD rolled four deep in their squad cars for days. Heightened surveillance has been in effect in the ‘hood since the verdict: bicycle cops, the ever present helicopter, they even broke out the horseback cops. None of this is new. LAPD has always acted as an occupying force in African and Chicano-Mexicano-Latino neighborhoods.  Citywide tactical alert for days, primarily visible in South L.A., I certainly didn’t see a heavy police presence on the Westside, despite the citywide alert. The Zimmerman trial and verdict has confirmed that the system does indeed work, the global system of white supremacy.  Things are cooler on the streets now. But we ain’t finished! We had better not be finished, because they certainly aren’t finished with us, pushing us into irrelevance, the grave and prison. 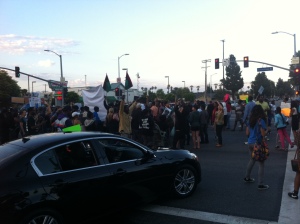 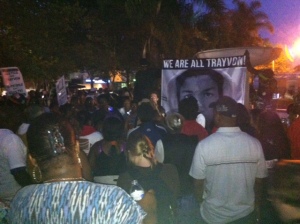 7 thoughts on “For Trayvon, For Us All”