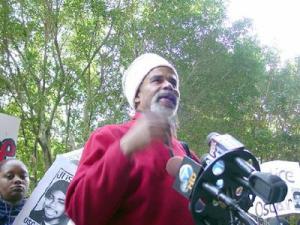 For twenty-three years I listened to Dedon keep revolutionary Pan-Africanism on the air and in the conversation. I listened to Dedon survive the Wednesday Night Massacre in the mid Nineties, when the bloc of African hosts were removed from KPFK’s airwaves. I listened to Freedom Now survive moving air times. Because I listened to Dedon, I was able to attend numerous cultural and political events around Los Angeles, able to meet like-minded fellow travelers, comrades and allies. Dedon remained steadfast, a rock against the muting and erasure of radical African political thought and practice, unapologetically Pan-Africanist and revolutionary when reformist solutions monopolize the discourse on the progressive left, and KPFK had begun to sound more like the voice of the unchurched left wing of the U.S. Democratic Party. Dedon kept the African world, the colonized and neo-colonized world, the anti-imperialist international, informed about revolutionary processes locally and globally, with transnational content committed to principled solidarity: Cuba, Ireland, Libya, New York, Palestine, Venezuela, South Los Angeles. But more than that, the chance to know Dedon, to be in his company and talk politics and culture with him, hear his stories of solidarity work and emancipatory journalism in the countries so regularly under attack from the U.S.’s military, economic, and media apparatus, and hear him talk about surfing was to be enriched, educated and uplifted. The first time I met Dedon, I had just started teaching at Santa Monica College. Dedon had brought a sister from the U.K. to speak to the Pan African Student Union. I was so excited to meet the man whose radio show I had been listening to throughout the 90s. He was gracious, gregarious, and just a good brother. He was just an incredible brother, and an elder of depth and integrity. When we had Dedon, we had a treasure, our brother dedicated to our freedom and to a free and just world, and now that we no longer have him with us in this flesh, we are left with a hole that we all must fill because we owe it to him. Mojuba, Baba Dedon!