The United States and NATO, a redundancy, wage open war on Africa.  In fact, the United States through the offices of the world system’s international agencies, such as the UN and the IMF, has been aggressively pursuing military intervention at least since the Bush administration launched the War on Terror.  President Obama very early in his tenure proved his willingness to deploy lethal force to achieve US goals in Africa when he gave the order to have the Somali so-called “pirates” taken out by Navy sharpshooters.  Now President Obama with his partners Sarkozy and Cameron wantonly bomb Libya in the name of humanitarianism and the interest of “democracy,” and officially recognize a cluster of criminals and traitors as the “legitimate” government of Libya.  This is, of course, consistent with Western disdain for the legal government of Zimbabwe, as Western governments routinely receive government officials from their favored and funded MDC-T and rebuff government officials from ZANU-PF, despite the power sharing agreement brokered by the African Union and the Southern African Development Community (SADC).  The arrogance of these imperialists is beyond galling.  They leave me just short of apoplectic with anger and contempt for them.

It comes to this: eventually one must take a side.  Some may insist that binaries should be avoided, that choosing one side over another only deepens the rift, locking opponents into a self perpetuating cycle of incrimination and re-incrimination, violence and responding violence.  Of course, issues are not always simple binaries.  After all, squares have four sides, and cubes have six.  But the moment for disinterested observation from a supposed position above or outside the fray has long passed.  One must finally accept that abstention acts as a passive vote for the eventual majority position.  One must eventually take a side, even a nuanced, contextualized side, eventually, as events dictate, or a side may be taken for one.  The events in Africa over the last seven months have laid bare before the world the vicious disregard with which the Imperialist Northern super states hold Africa, Africans, and African institutions.  So if one is not prepared to take a side, choosing instead a practiced objectivity within which to wrap oneself as guard against accusation of partisanship, then one must accept the contempt of those who have thrown all in for the cause.  If one cannot or will not rise to the defense of the most progressive, forward and revolutionary nation-states in contemporary Africa, Libya and Zimbabwe, one chooses abjectivity for Africa’s foreseeable future.

To get right to the point, the NATO bombing of Libya must stop now, immediately!  The sanctions against Zimbabwe must be lifted now, immediately!  African development and indigenization must proceed with all due speed!  Libya and Zimbabwe have unapologetically put these goals, development and indigenization, at the forefront of political and social action in Africa.  These are the unforgivable sins for which they bear the brunt of imperialism’s deadly and persistent attack.  And they must be defended!  The distorted democracy practiced in the Global North can offer no real model for democracy in Africa precisely because it is itself profoundly undemocratic.  Capitalist modes of production can ultimately offer no lasting solution for African development precisely because capitalist modes of production under the current world system embody the very site of Africa’s repression.  Brother Comrade Kaddafi and President Mugabe bear the disdain of western liberals and progressives because they are not seen as fully committed to democratic politics, or even hostile to them.  These African patriots are excoriated as dictators, despite the recent recognition of Libya as a constitutionally governed state responsive to the demands of the Libyan people and committed to the further democratization of its political culture in the UN periodic review, and despite regularity of open elections in Zimbabwe since the country won its independence in 1980.

The Arab Jamahariya of Libya and the Zanu-PF government of Zimbabwe are popular governments regardless of the judgment of Western journalists, pundits and diplomats.  Furthermore, neither government nor civil society in North America or Europe has any moral authority or monopoly on democracy so long as they remain committed to neo-liberal solutions to the crisis of capitalism or their narcissistic expectation that democratic institutions must mirror those of the Global North, institutions and practices that are themselves compromised by corporate interests and endemic racism.  Choose a side: fight for the African people or facilitate the continuing rule of imperialism from the Global North.  Defend the unfolding African Revolution, or support counter revolution.  Work to achieve the vision of a united Africa, The United States of Africa, explicit goals of Kaddafi and the Green Revolution and Mugabe and ZANU-PF, or condemn Africa to further fragmentation, exploitation, and dispossession.  We need clarity, and clarity reveals that these Global North countries are not now nor have they ever been genuine friends of Africa and Africans.  They have not even been disingenuous friends.  They are no friends at all, the African descended Barack Obama and Susan Rice no better than their European and Euro-American allies and counterparts.

Already the indignity of President Gbagbo’s arrest by France in the Ivory Coast despite that country’s Supreme Court declaring Gbagbo the elected president after investigating irregularities by France’s man Ouatarra and the electoral commission, and the near complete contempt for the African Union’s efforts to sponsor a negotiated peace in the E.U. / U.S. sponsored civil war/counter revolution in Libya severely damage any pretense to sovereignty in Africa.  If Kaddafi’s financial support for the African Union is taken as compromising that continental organization’s independence, what then can we say about U.S funding of NATO, the UN, or the IMF?  What makes these organizations uniquely able to remain independent despite pressure from their major funder?  Nothing, I think.  These people, the U.S. and the E.U. are the enemies of Africa and Africans.  Eventually one must choose a side.  Defend the African Revolution.  Defend Libyan sovereignty and Zimbabwean sovereignty.  No bombs on Libya!  No sanctions on Zimbabwe! 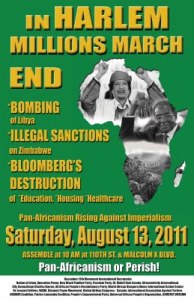 One thought on “Defending Libya and Zimbabwe Is Defending African Sovereignty”